A Rhodes Journey - Getting started with RhoStudio on OSX Lion

Rhodes is a cross-platform open source mobile development framework that is inspired by Ruby on Rails. in some aspects of development. Rhodes was developed by RhoMobile, which was recently acquired by Motorola Solutions.

We started checking out Rhodes a year ago when using Snow Leopard as a development platform, and developed some trial apps. At that time, Rhodes used to be a simple gem that could be downloaded using the compatible Ruby (v 1.8.7) and rvm. Since I recently upgraded to Lion, I thought I'd give Rhodes another spin to see if it had changed. Indeed, I found that RhoMobile has grown by leaps and bounds, and that Rhodes is now a small part of a much larger scheme of things: Rhodes now ships within Motorola's Rhomobile Suite which includes, apart from Rhodes, an IDE called RhoStudio for developing RhoMobile applications, and two other frameworks called RhoConnect and RhoElements.

In this post I'll explain how I went about setting up Rhodes 3.3.3 from the RhoMobile suite and running the sample APIs app for Rhodes (included with the  RhoStudio installer) on iOS and Android simulators using the RhoStudio IDE.

First off, since I wanted to start developing for iOS, I needed to download and install the XCode 4 from the AppStore.

Next, to run iOS aps on OS X I had to install the relevant simulators. These were not bundled with the XCode and had to be downloaded within XCode by going to XCode > Preferences > Downloads.

Here, we select the relevant iOS device simulators and XCode command line tools, which is a prerequisite of installing RVM on OS X.

Note: if you don't want to develop for iOS and still want to install RVM (without installing XCode, as it is a heavy download), then you might need to install the gcc compiler for Mac to proceed.

In order to develop for Android, we need the Android SDK and Android NDK. These need to be downloaded and unzipped at a convenient location, which will be needed later to configure Rhodes and RhoStudio.

Next, ensure that you have RVM and Ruby version 1.9.3 installed on your Mac. There is a step by step guide available here. In my case I used RailsInstaller for installing Ruby on Rails, which also installed RVM. If you prefer GUIs then you may want to use JewelryBox for managing RVM, rubies, gemsets and gems on your Mac.

Rhodes also requires a JDK. For Lion, we need to install Java from the apple support page.

Now we are ready to download the Rhomobile suite installer dmg file from here. Once downloaded, mount the dmg.

Here, you can choose to proceed with installing the the entire suite provided by running the 'install gems on rvm' script file. However, I wanted to install only Rhodes, and thus, installed only the relevant gems using the following commands in Terminal:

Next, copy the "Motorola RhoStudio.app" from the dmg into the Applications folder of your Mac and launch it from Applications. Upon launching, RhoStudio requests a workspace path that can be specified to a location of choice. Note that the Rhodes installation guide suggests that one shouldn't add a path with spaces as it causes problems with RhoConnect applications.

We need to configure the android SDK path in RhoStudio for it to build for android. Go to  RhoStudio > Preferences > RhoMobile > Android and add the paths for both SDK and NDK in relevant spaces. Click OK.

Within the Rhomobile suite installer downloaded earlier, go to samples and copy the rhodes-system-api-folder to your workspace folder specified earlier. In RhoStudio, import the project by selecting File > Import > Existing Project into workspace. Choose the root folder as the workspace directory to see the project in the list. Select the project and click Finish. The project should now be listed in the Project Explorer.

Before you can run the project on Android, you need to install the relevant SDK and Google APIs. To do so go to <android-sdk-macosx>/tools and run the file called 'android'. This should launch the Android SDK manager. Here we need to select the android versions that we want to build for. At the time of writing this post, the build.yml file is configured for android 3.0, which is what we will select in the SDK manager and install.

After the installing the SDK platform, we also need to install the 'Google APIs' displayed under the installed SDK in the SDK manager. This is used by some Rhodes libraries in the kitchensink project. 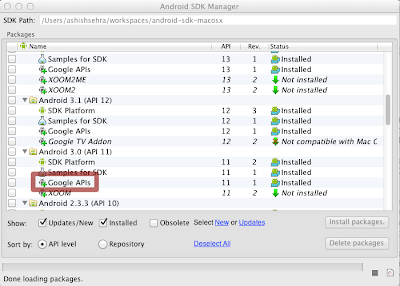 In order to run the project, go to Run > Run Configurations...  and create a new configuration by double clicking RhoMobile Application. Select the platform as Android and Simulator type as Simulator. Make sure that Project name says rhodes-system-api-samples. Click Run to give it a go. 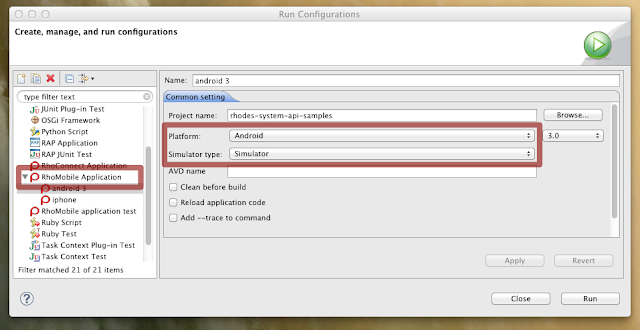 Note: If it fails with a message requesting you to run 'set-rhodes-sdk' then do so in the project directory in the terminal and try running again. The application takes between 2 to 5 minutes to launch on an android simulator.

To run for iPhone create another run configuration and this time choose the Platform as iPhone. Click on run to start building for iPhone. Once built, the studio will launch the iPhone simulator with the application loaded.

This concludes a walkthrough of how to set up Rhodes and RhoStudio on Mac OS X Lion.

We can now proceed to creating Rhodes apps for both Android and iOS platform with (hopefully) less effort than writing apps in separate native environments.
Posted by Ashish Sehra at 23:02